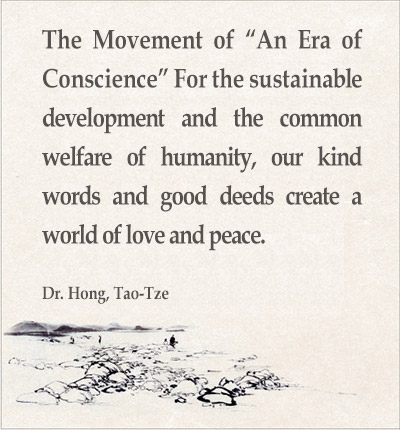 UN statistics shows that more than 840 million people still live in starvation. However, the wasted food in a year amounted to 1.3 billion tons, enough to feed 2 billion people. In the past year, geopolitical risks were on the rise due to territorial disputes. Many civilian protests against government malfunctioning turned into bloody chaos. What is even worse is that the threat of nuclear weapon has never gone away. In the past one hundred years, the average temperature on earth has risen by 0.8 degree Celsius. If the average temperature rises by 2 degree Celsius, it will cause great instability to the climate pattern and put mankind’s continued existence at risk. We have seen calamities after calamities as a result. The trust among people is collapsing. What do we do in the face of the disorderly world?

In the 53rd UN Annual NGO Conference in 2000, Dr. Hong Tao-Tze, president of the Federation of World Peace and Love, has advocated “The dawn of the new century has come amid the turbulences of the 20th century. Global solidarity is imperative and urgently needed. Only with international cooperation will the path to peace be reached. NGOs and world citizens play a pivotal role as great facilitators.”

In the face of heightening international tension, risk can be triggered at any moment. It is difficult to tell true from false, good from bad and right from wrong. People’s hearts are surrounded with anxieties and uncertainties. On January 1 of 2014, the Federation of World Peace and Love (FOWPAL), Association of World Citizens (AWC), and Tai Ji Men Qigong Academy jointly promulgated the movement of “An Era of Conscience.” Everyone is the leader and guide of his/her own conscience. The key to unlocking the energy of peace is in everyone’s hand. We hope that everyone will speak kind words and do good deeds to spread the positive influences of goodness. Dr. Hong Tao-Tze said, “Kind intentions and good hearts are the positive energies necessary to safeguard the earth’s sustainable development.” We should start from ourselves and spread the message of goodness to others. When the energies of goodness are connected, spread and expanded, the ideal world of one world with love and peace will become a reality.

The movement has received widespread recognitions and feedbacks. A designated website at www.aneoc.org has been created to become the platform of communications and exchanges. The initial ceremony of An Era of Conscience will be held on February 16. Let’s consolidate our kind words and good deeds to create a world of love and peace for the earth’s sustainable future and mankind’s common welfare.

Introduction to the organizers

The Federation of World Peace and Love (FOWPAL) 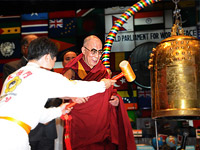 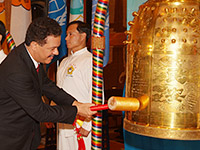 Established in 2000 in the United States by Dr. Hong, Tao-Tze, FOWPAL is an international peace organization with members from 137 nations guided by the principle of “Changing the world for the better starting with one good thought.” It aims to promote world peace and love through various activities such as world summits of love and peace, ceremonies of ringing the “Bell of World Peace and Love,” and cultural exchange performances.

For more than ten years, FOWPAL has inspired world leaders to make commitments to world peace and to take real actions to achieve peace. The continuous efforts have led to peaceful resolution of conflicts in South America and Africa. As of today, 451 leaders from 128 nations have rung the Bell of Peace, including 51 heads of state and government, 8 Nobel Laureates, UN ambassadors, and other visionary leaders from various fields.

The Association of World Citizens (AWC)

The Association of World Citizens (AWC) is a worldwide movement of individuals who participate fully in the emerging world society where disputes among States are settled within the framework of world law and through negotiations in good faith so that common interests may be found and developed.

AWC founded in 1975 enjoys consultative status with the UN through the Economic and Social Council and is associated with the UN DPI. World citizens work in cooperation with government diplomats, UN Secretariat staff, and the representatives of other NGOs to resolve armed conflicts, to defend human rights, and to promote ecologically sound development in the framework of the 2015-2030 Sustainable Development Goals. 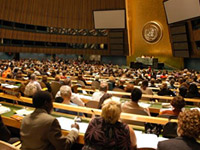 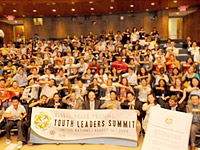 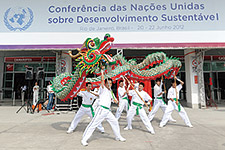 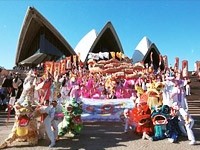 Tai Ji Men is an ancient menpai (similar to school) of qigong, martial arts and self-cultivation. Tai Ji Men is a treasure trove of traditional Chinese culture and holds the key to unlock the origin of wisdom. The culture of Tai Ji Men is deeply rooted in Tao wisdom, inheriting one of the highest philosophies of mankind, which has been passed down and practiced in a cloistered tradition since ancient times. The contemporary Zhang-men-ren (grandmaster) of Tai Ji Men, Dr. Hong Tao Tze, established Tai Ji Men Qigong Academy in 1966 in response to a calling to bring both physical and spiritual health to modern society. Dr. Hong teaches his dizi (apprentices) the philosophy and wisdom of life; guiding them to cultivate moral character and purify hearts while strengthening physical, mental and spiritual health. Through different qigong practice techniques and self-cultivation, Tai Ji Men dizi learn to reach the highest state of unity between heart and qi, harmony between heaven and man, finding the true self and returning to original purity.

Tai Ji Men Qigong Academy is an international non-profit cultural organization. The central doctrine of Tai Ji Men is “Nurturing the positive energy from the universe, following the good examples of sages from all times.” The aim of Tai Ji Men Qigong Academy is to promote the traditional essence of Chinese culture, and to advance the physical, mental, and spiritual health of world citizens. Tai Ji Men dizi are located around the world and come from all kinds of professional fields. Guided by the Zhang-men-ren, the dizi hold in esteem the spirit of universal brotherhood, inherit traditional cultures of human relationships, etiquette, and conscience, and spread the seeds of love and peace to wherever they touch around the Earth.

Over the years, Dr. Hong and his dizi have visited over 300 cities in more than 100 countries, devoting more than 2 million man-hours in cultural performances around the world to promote international friendship and spread the beauty of the Chinese culture across the world. Over 300 on-campus educational seminars on love, peace and human rights have been held in internationally. Tai Ji Men launched the Movement of An Era of Conscience, generating positive commitments and actions from people and organizations in 200 countries. More than 30,000 symposiums for public welfare have been held to share the wisdom of yin and yang. Over 14,000 articles about Tai Ji Men dizi’s life stories have been published in various media to encourage and inspire people. Tai Ji Men also has produced more than 1,300 episodes of the TV program “Energy Family” which have been broadcast in media worldwide and on the Tai Ji Men website with more than 101 million visits. Tai Ji Men dizi devote tremendous personal effort to share the good experiences they have learned with the world, wishing that everybody can enjoy health, wealth, wisdom, happiness, and wellbeing in their lives.

Everyone is the leader of his/her own conscience. Let’s spread and promote good thoughts, kind hearts, positive words, and right actions to make the world better and brighter.

The website of the movement is to consolidate words and stories of conscience in actions so that people around the world are able to communicate, exchange and inspire newer and better ideas to forge waves upon waves of powerful positive energy. Your words of conscience and practical actions will bring hope and light to the world. Please join us in the following ways. 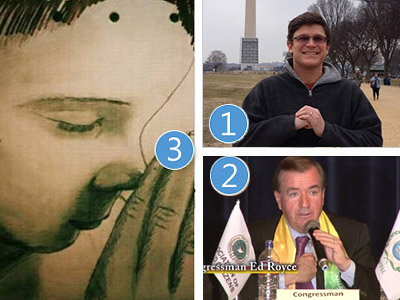 A. Ways to participate as an individual:

1. Write a paragraph: send in your words, experiences, and practical actions for An Era of Conscience in a short article (preferably no more than 300 words), with a picture of you performing the hand gesture as shown in the picture on the right. Click on the “Submit” button on the web page.

2. Record a video: record a 30-second video clip or voice memo for An Era of Conscience. Email the recording to info.aneoc@gmail.com with your name, organization, and title; our representative will contact you upon receipt.

Draw or paint: email your drawing or painting for an era of conscience to info.aneoc@gmail.com with your name, organization, and title; our representative will contact you upon receipt.

B. Participate as an organization:

Your esteemed organization is invited to participate as a co-organizer of the movement. Please download the form “Proposal of Joint Promotion” on our website for more details. After conducting the event of “An Era of Conscience” within your organization, your organization will share the results of the event. Click on “Co-organizer/Join us” and provide us the name of the organization, its category, nationality, website, summary of the event, contact person, contact number, contact email and picture(s) from the event. Your organization is welcome to download “An Era of Conscience” banner and use it on your website or link it to our official website http://www.aneoc.org/en.